Clear 95% of Psoriasis and Vitiligo with XTRAC

Two of the most emotionally debilitating skin diseases for patients are Psoriasis (red, inflamed patches on the skin) and Vitiligo (a depigmentation of the skin made famous by Michael Jackson), both of which affect millions of people in the US alone. We are thrilled to be able to bring a new treatment to our patients - the XTRAC Laser - which has a success rate of 95% clearance.

XTRAC is the only FDA-cleared, clinically proven excimer laser that gets skin clear of psoriasis—and it works fast, with many patients seeing significant improvement and long-lasting remissions. Because XTRAC delivers a highly targeted, therapeutic beam of UVB light only to areas of the skin affected by psoriasis, healthy skin surrounding the lesions stays that way.

XTRAC clears the symptoms, prolongs the remission and returns skin to a clinically healthy state in record time. XTRAC has none of the drawbacks often associated with other psoriasis treatments-such as premature aging of healthy skin, skin thinning, resistance to medication, or potential negative systemic side effects. 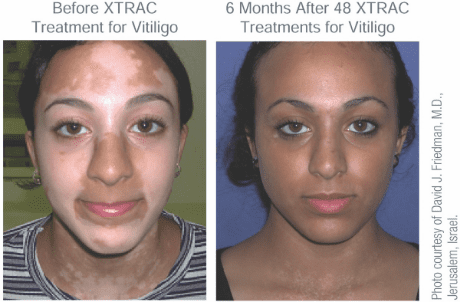 Vitiligo is Not Forever

XTRAC treatments can minimize and, in many cases, even eliminate Vitiligo depigmented patches. The XTRAC laser delivers a targeted beam of UVB light and only the areas of skin affected by Vitiligo receive the laser energy.

Due to rapid exposure times even large areas can be treated in just five to 10 minutes - much quicker than the duration of conventional phototherapy light sessions. And most importantly, XTRAC treatments achieve complete response rates faster in a higher proportion of patients.

The XTRAC laser creates the sensation of heat during treatment. Typically this fades within 15 minutes of treatment. Typical regimen is two treatments a week. Psoriasis takes around 10 treatments to clear with an average of 3.5-6 month remission. Vitiligo takes closer to 20 sessions to clear.

XTRAC has none of the drawbacks often associated with other psoriasis treatments-such as premature aging of healthy skin, skin thinning, resistance to medication, or potential negative systemic side effects. Some patients, however, experience a reaction similar to sunburn or blistering at the site of the treated area and in some cases, an increase in pigmentation may occur which clears within a few weeks.